Kagi charts are similar to Point and Figure, and Renko Charts. They were developed in Japan in the 1870s and introduced to the West by Steve Nison. The Kagi chart consists primarily of vertical lines that continue up or down until the underlying price reverses by predetermined amount. When the price reverses, a vertical line is started in a new column and is connected to the previous vertical line by a short horizontal line. These charts use only the closing prices and disregard highs, lows and volume.

The thickness of the line changes as the ...

The Point and Figure (P&F) chart differs from the traditional bar charts as it does not plot price movement over time. Instead it plots unidirectional price movements in one vertical column and moves to the next column when the price moves in the opposite direction. It represent an increase in price by plotting X's in the column and a decrease in price by plotting O's. Each X and O represents a box of a set size or price amount.

The chart also has a box reversal amount that determines how many boxes should be ...

Line charts are the simplest types of stock charts and were favored by Charles Dow, who is widely considered as the father of technical analysis. Charles Dow felt that the closing price of a stock was the most important price to consider in analysis as it determined each period's unrealized profit or loss. Dow felt that plotting the highs and lows of the period obscure the real value of the stock, which, he argued, is determined solely by the period's close price.

Line charts are popular with traders who rely more on chart patterns for trading signals as the ...

Renko charts are a Japanese chart type that has been brought to the West's attention by Steve Nison, in his book, Beyond Candlesticks: New Japanese Charting Techniques Revealed. Renko charts are based on point and figure charts. It is called 'renko' charts because of its structure. The word 'renko' is derived from the Japanese word 'renga', which means bricks, and the structure of Renko chart shows a stack of bricks or boxes arranged diagonally in the trend with each brick having the same dimensions. As with point and figure charts, a new brick is only drawn on a Renko charts when the close price has advance or declined by at least a predetermined fixed amount above or below the previous brick or box, with a brick or box bring drawn for each multiple of the fixed amount that the price action has exceeded the top or the bottom of the previous brick. Thus, the price movement of a given time period or time-frame can be represented by one brick, numerous bricks or no brick.

For example, if the chart has a predetermined size of five points, and the top of the last brick is 100, a bullish hollow brick is only drawn when the price action in the next time period closes above 105 with additional hollow bricks being drawn for every five points higher close is. Thus, if the closes at 103, no brick is drawn as the price has not advanced by the predetermined amount, and if the price closed a 123 points, four rising bricks would be drawn: the first from 100 to 105, the second from 105 to 110, the third from 110 to 115, and the fourth from 115 to 120. Each of these bricks is drawn in the next column to the right, making the chart time independent. Also, in the case of the price moving to 123, low of the last brick would be 115. In order for a bearish black brick to be drawn, the price in the following time period would need to close at least five points below the last brick, which had a low of 115. in other words, it would need to close at 100 or lower for at least one bearish black brick to be drawn.

The high and low of a time period is ignored in Renko charts, and while the close price is used to determine the amount and direction of the bricks to be drawn, the actual close price is not as important as the top or bottom of the last brick. The following chart is a 30-minute candlestick chart of the EUR/USD followed by a comparative Renko chart of the same time period. The Renko chart has a point size of 50 points (5 pips) and the arrow on the two charts corresponds with the same price. 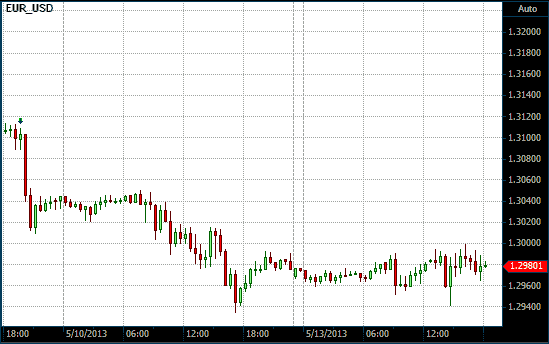 Candlestick chart of the Euro/USD 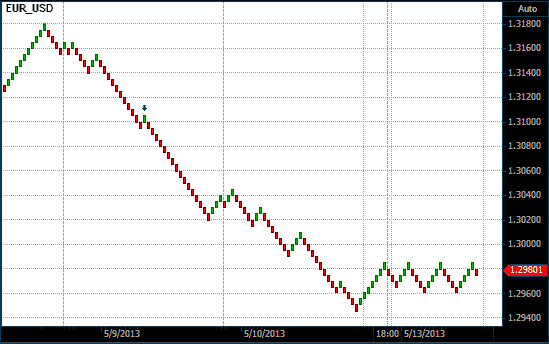 Renko chart of the Euro/USD

Although the example above used absolute points for the predetermined point or brick size, you can also use the Average True Range (ATR) to set the point size more dynamically, increasing and decreasing the brick size as the market volatility increases or decreases.

The Renko Chart is a trend following chart that eliminates lateral price movements. It's main signals are the emergence of a new trend. In theory this occurs when a bullish hollow brick is followed by a bearish black brick it signifies the potential start of a down trend and signals a short entry; and when a bearish black brick is followed by a bullish hollow brick it signifies the potential start of a uptrend and signals a long entry. However, in practice a number of bricks could be drawn to represent the price movement of a single time period and you can only draw the next brick or bricks once you know what the close price is for that period. This means that the actual entry signals are not necessarily the first brick of a different color to its predecessor.