The key Fibonacci extension levels are found by performing various mathematical operations on the numbers in the Fibonacci summation series, and on the results of those operations.

Multiple Fibonacci extensions can also be drawn starting from different lows in an uptrend or different highs in a down trend. The end points for the different extensions are the same most recent turning point and can be used with Fibonacci retracement levels of larger price swings. This creates multiple levels with areas were two or more Fibonacci levels are in close proximity being more significant.

The following is a 1-hour chart of the GBP/USD with a Fibonacci Extension drawn on the countertrend rally from the lows made at 17:00 on November 8, 2013 to the high made at noon on November 11, 2013. The subsequent price movement back in the direction of the dominant down trend came within a few pips if the 261.8% extension level on November 12, 2013 before reversing. 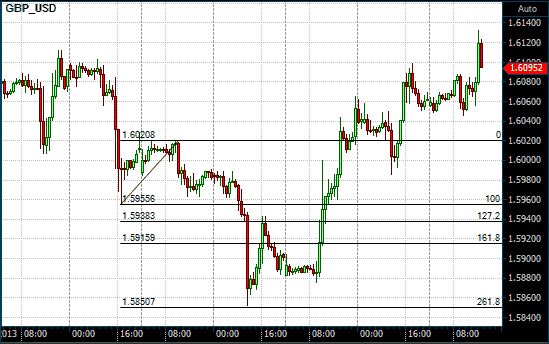