Momentum indicators can be used to track the rate at which the price of the underlying security changes rather than the price changes itself. These indicators are usually leading indicators as they tend to be oscillators by nature.

A Moving Average (MA) is a very versatile and widely used trend indicator that attempts to remove market 'noise' by plotting an average of the recent price bars. A side effect of the process of averaging means that the MA lags price action.

The Moving Average Convergence / Divergence (MACD) is a simple oscillating trend and momentum indicator that was developed by Gerald Appel. It shows the convergence and divergence of two exponential moving averages (EMAs) by calculating the difference between the two EMAs. A signal line, which is an EMA of the MACD is added to indicate bullish and bearish conditions. Because of its construction, the MACD is both a trend indicator as it uses trend indicating moving averages (MAs) and a very effective momentum indicator. However, the MACD can be plotted as two lines that fluctuates above and below a zero line, or as a MACD histogram indicating the distance between the MACD and the signal line. When plotted as a line, the MACD has no upper or lower limit and thus does not indicate overbought or oversold conditions.

The standard MACD uses the 12-day EMA and 26-day EMA of the closing price with the shorter period and faster EMA being subtracted from the longer period and slower EMA. A 9-day EMA of difference between the two EMAs is the calculated and used as a signal line to identify the bullish or bearish turning points. 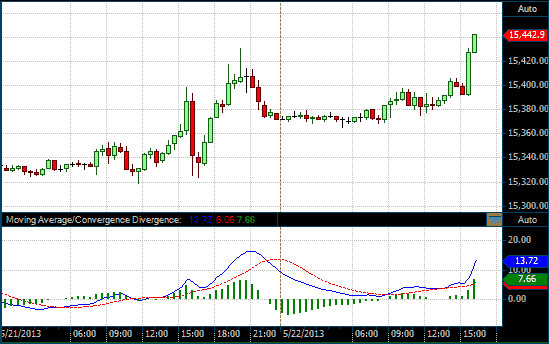 MACD on a 30 Minute DOW chart