The Chande Momentum Oscillator (CMO) is a oscillating momentum indicator that was developed by Tushar Chande and introduced in his book, The New Technical Trader of 1994. The CMO is designed to measure what Chande calls 'pure momentum' and returns data as a line that oscillates between +100 and -100. It is similar to the Relative Strength Index (RSI) except that it measures momentum on both up days and down days. The CMO also does not use internal smoothing and thus does not obscure short-term extremes in momentum. As a result, the CMO often reaches over bought and over sold areas more regularly than momentum indicators, such as the RSI, that have internal smoothing.

As with all oscillators, buy and sell signals can also be generated by positive or negative divergence between the CMO and the underlying security.

The following chart is a 4-hour futures chart of the Dow Jones Industrial Index (JDI) with an 8-period CMO plotted in the lower chart panel. 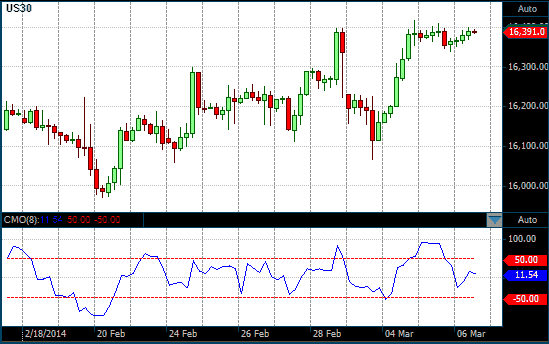