Support and Resistance indicators are usually drawing tools such as "Andrews' Pitchfork, Gann Lines and Fibonacci Retracements that are drawn directly on the price chart. These indicators are usually a set of lines that attempt to forecast areas of support and resistance in an existing trend. They indicate where the trend could meet support or resistance. Most of these indicators also indicate the possible end of the existing trend. This occurs when the support or resistance line is broken.

When the support or resistance lines are broken, these indicators are used to forecast subseque...

Andrew's Pitchfork, which is also known as Median Lines, is a support and resistance indicator that was developed by a Thermodynamics Professor at MIT, named Dr. Alan Andrews, in the 1970s. It uses three parallel trend lines based on three alternating pivots to identify possible support and resistance levels.

How is it calculated and drawn?

The trendlines are created by placing three points at three consecutive peaks or troughs, or pivot highs and lows, at the start of a trend. A straight line is then drawn from the first point, intersecting the midpoint or the median of the other two points. For this reason, Andrews' Pitchfork is also called "median line studies". Parallel, equidistant lines are then drawn from the second and third points. The result is a trend channel with a median line in the middle.

How is it used and interpreted?

As with any other channel, the outer trend lines mark potential support and resistance levels. The prevailing trend is said to remain intact as long as the Pitchfork channel is not violated and a trend reversal is said to occur when prices break out of a Pitchfork channel against the direction of the trend.

The following is a 4-hour chart of the Euro/USD with an Andrews' Pitchfork drawn from three pivots that mark the start of the current down trend starting with the last swing high made on May 1, 2013. 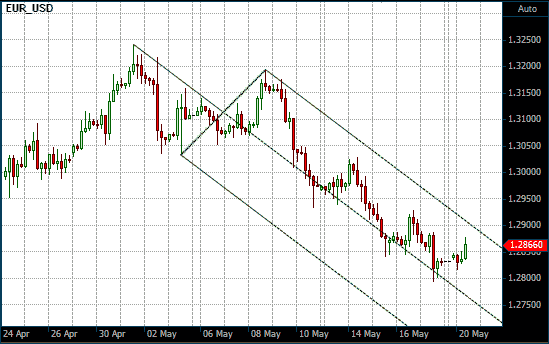