At its basic level, these pivot levels are calculated using the range and close of the previous period. However, there are different formulae that can be used to calculate the various support and resistance levels. These include the Classic Floor Trader's ...

However, the trend line , which offers trade entries in the direction of the trend, should always ...

Support and Resistance lines are often confused with trend lines. However, support and resistance lines are horizontal lines drawn under the minor lows and above the highs respectively. They indicate where a previous rally met resistance that drove the price back down and where a previous decline met support that pushed the price back up. These are two important levels in terms of trend identification since an uptrend will tend to break through previous resistance levels to make higher highs while a down trend will break through the previous support levels under the market to make lower lows. When the support line below the recent minor low in broken in an uptrend, it indicates that the uptrend is weakening and may reverse soon. Similarly, when the recent resistance line in a down trend is broken, it indicates that the trend is weakening and that a trend reversal may occur. When a support or a resistance line is broken, it often swaps around to become a resistance or support line for future price movements.

How to Draw Support and Resistance Lines

Knowing where to draw the trend lines takes a little experience but improves dramatically if you can identify the minor peaks and minor troughs. Generally a minor peak is formed when the high of the bar or candlestick is higher that the high of the bars or candlesticks on either side. Larry Williams refined this method by requiring that the bar on the right cannot be an inside bar but must have a lower low. Otherwise that bar is not valid.

Support and resistance lines can also be identified in areas of congestion where prices battled to close higher or lower. These areas can be identified by the length of time the price struggled at a level and/or the amount of volume that was traded at that level.

Of course, the type of chart you use will also affect how the support and resistance lines are drawn:

There is a very good reason why support and resistance lines should be drawn at the open and close price rather than at the high or low of a bar or candlestick chart. The close price represents the consensus for that bar while the spike high or spike low represents failed attempts to push the price higher or lower. These failed attempts did not garner enough interest from other traders to move the price and are thus not significant markers of what traders believe to be the fair price at that moment in time. And we want our support and resistance lines drawn at significant levels.

Support and resistance lines that are less significant do not provide good entry and exit signals but are more useful for identifying chart patterns and for use in conjunction with technical indicators. 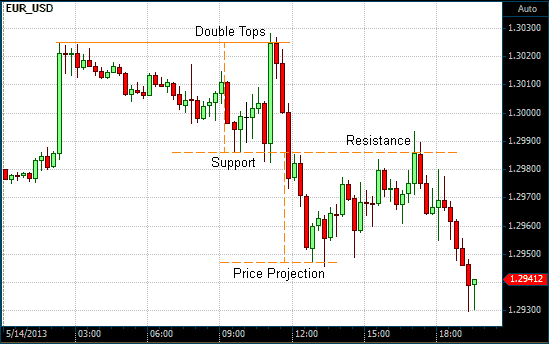