At times the price will tend to move in a channel between a trend line and a another line that runs parallel to the trend line. The later is referred to as a channel line or a return line. When these are identified, they represent a clear exit point for an posistion that was taken at the trend line; i.e., in the direction of the current trend. Aggressive traders may also use the channel line as an entry point for a trade against the trend, though trading against the trend is not advisable as those trades tend to carry a higher risk and tend to carry a higher failure rate than trades taken in the direction of the trend. Another significant signal is the failure of the price to reach the channel line. This could precede a break of the trend line and a possible reversal of the trend, though the price may first retest the recently broken trendline. 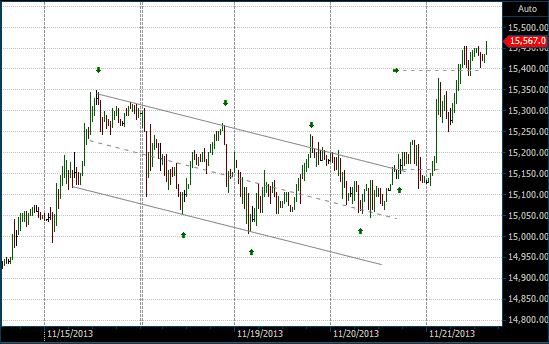 Trading the Channel on the Nikkei 225 chart