The Relative Strength Index (RSI) is an extremely useful oscillating momentum indicator that was developed by J. Welles Wilder, Jr. and is one of the most widely used indicators in technical analysis. The RSI was first introduced in J. Welles Wilder's book, New Concepts in Technical Trading Systems of 1978. It compares the magnitude of a security's recent gains to the magnitude its recent losses to determine overbought and oversold conditions.

Peculiarities of the RSI

An RSI with a very short look back period is very volatile and will move from extreme highs to extreme lows and back again in very quick succession, generating contradicting signals is quick succession. Also, in markets that are not open 24 hours a day, any opening gap at the start of a session would have a large impact on the RSI reading when the look back period is very short.

Also, in flat, sideways markets, the RSI will generate signals while the price lacks momentum and hardly moves.

In the classic view, a security is thought to be overbought when its RSI reading is above 70 and oversold when its RSI reading falls below 30. This makes it a good indicator for mean-reversion systems. Wilder recommended using the 70 and 30 levels as overbought and oversold levels respectively. When the RSI moves up over the 30 line it is considered a possible bullish reversal while a move down below the 70 line is considered a possible bearish reversal.

Buy and sell signals can also be generated by positive and negative divergence between the RSI and the security.

Due to the nature of the RSI and its constraints between 0 and 100, the movement of the RSI is not directly proportional to the price movement. This makes divergence between the RSI and the price movement quite common and rather unreliable, especially when the RSI reaches its extreme levels. Many traders, such as Andrew Cardwell, have therefore seen divergence as a potential entry point in the direction of the trend rather than against the trend as is the case in the classic interpretation of the RSI.

Later day traders have also noticed that the RSI range from overbought to oversold shifts during bullish and bearish phases of the market. Often in bullish markets the RSI will fail to reach the oversold 30 level while exceeding the overbought 70. This has prompted the suggestion that the range be increased by 10 points to the 40 to 80 levels during a bull phase. Similarly, during the bear phase, the levels should be decreased by 10 points to the 20 to 60 levels. Constance Brown has taken this suggestion one step further by suggesting that the extreme readings on the RSI during the bear phase and extreme reading during the bull phase rather than a fixed numbers should be used to determine the oversold and overbought levels.

The following chart shows a 20-period RSI in the lower chart panel on a 30-minute chart of the Dow Jones Industrial Index. The blue line is the RSI and the red dashed line is a 5-period simple moving average (SMA) of the RSI. 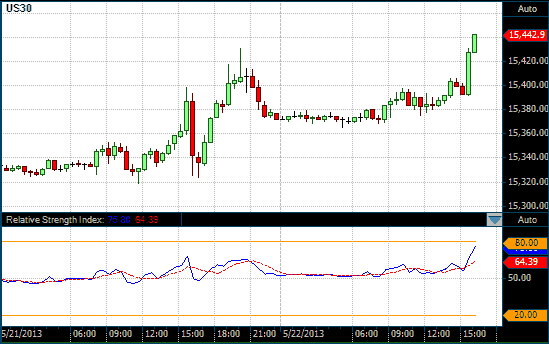 Notice the disproportionality in the movement of the RSI compared to the price action, especially from around 16h30 to 21h00 on May 21, 2013.