J. Welles Wilder, Jr., developed a keen interest in the stock markets in the 1970. Approaching the stock market from an engineering perspective, Wilder set about trying to identify mathematical models that could be used profitably to trade what appeared to be random price movements.

ADX is a lagging trend indicator designed by J. Welles Wilder, Jr. and indicates the strength of a trend, or when a stock is in a strong uptrend or downtrend, or whether it's moving sideways. It is part of an indicator system called Wilder's DMI, which was first introduced in J. Wells Wilder's book, New Concepts in Technical Trading Systems of 1978. Wilder's DMI consists of three lines: the +DI line, the -DI line and ADX line but the ADX can also be used on its own, and on any trading time frame to help you determine key turning points in the market. The ADX is an oscillator that fluctuates between 0 and 100, with values above 40 generally indicating a strong trend and values below 20 indicating a weak trend or flat trading ranges.

However, the ADX does not indicate if the trend as bullish or bearish. It merely indicates the strength of the current trend. Thus a value above 40 can indicate a strong uptrend as well as a strong downtrend. Extremely high values indicate that the trend will likely come to an end.

Also, ADX does not give entry or exit signals. It does, however, give you some perspective on where the stock is in the trend. Low readings and you have a trading range or the beginning of a trend.

When ADX is between 0 and 20 it indicates that the stock is in a trading range and you'd need an oscillator indicator to determine entry and exit points.

When ADX moves above 30 it indicates the start of strong trend! This is the best time to enter a trade!

Once ADX moves above 50 it becomes more probable that the trend is coming to an end and trading ranges developing again.

The following chart shows a 13-period Wilder's DMI in the lower chart panel on a 30-minute chart of the Dow Jones Industrial Index. The green line is the ADX line while the blue line is the +DI line and the red line is the -DI line. 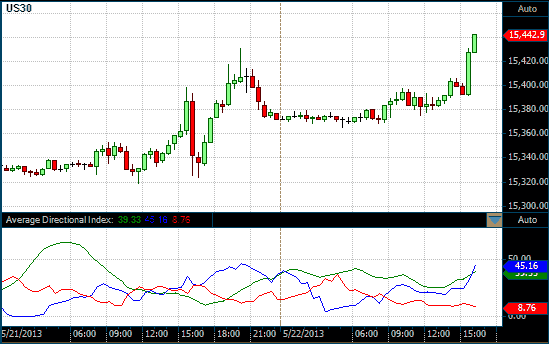 ADX on a 30 Minute DOW chart