The key Fibonacci ratios for extension studies are the ratio of 127.2%, 161.8%, 261.8%, and 423.6%. Of these, the 161.8% and 261.8% ratios are the most significant levels. These levels are drawn from the previous low to the high in an uptrend or from the previous high to the low in a down trend. Horizontal lines drawn at these levels indicate possible support or resistance levels, depending on the direc...

The Fibonacci summation series of numbers is simply the sum of the two preceding numbers starting with 0 and 1, and continues on to infinitely. The first few numbers in the sequence are as follows: 0, 1, 1, 2, 3, 5, 8, 13, 21, 34, 55, 89, 144, etc. Fibonacci retracements is based on the common mathematical relationships or ratios between these numbers.

The key Fibonacci retracement levels are found by performing various mathematical operations on the numbers in the Fibonacci summation series, and on the results of those operations.

When using Fibonacci retracements, a technical analyst waits for the market to turn and then divides the previous trend movement, or wave, by the Fibonacci retracement ratios, starting from the previous high to the low in an uptrend and in the opposite direction in a down trend. Horizontal lines are then drawn at these levels and are used a possible support levels if the larger trend is an uptrend, or as possible resistance levels if the larger trend is a down trend. These thus become places at which the trader could buy in a larger uptrend or sell in a larger down trend. The most significant levels are usually the 61.8% level and the 38.2% level. The 23.6% level and the 78.6% (or 76.4%) levels are not as significant.

Multiple Fibonacci retracement studies can also be drawn starting from different peaks in a down trend or different lows in an uptrend. The end points for the different retracements are the same most recent turning point. This creates multiple levels with areas were two or more retracement levels are in close proximity being more significant. It is important that the end point for multiple retracements studies have the same, most recent swing high or swing low as their end points.

The following is a 4-hour chart of the Euro/USD with Fibonacci Retracements drawn from significant high and lows made on May 14, 2013 and May 15, 2013 respectively. Notice how the subsequent reaction rally met resistance at the 38.2% retracement level before moving lower. 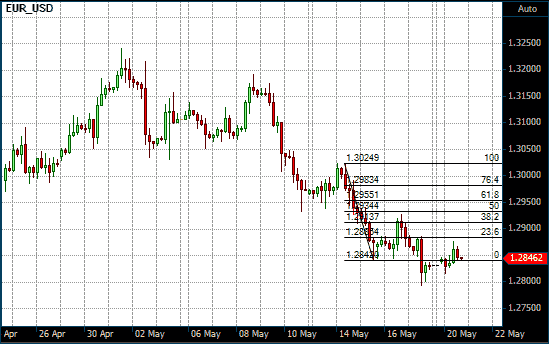