Complex Elliott Wave patterns can be a challenge for technical analysts. They usually develop in Corrective Waves where a simple three wave correction can become the first wave within a larger corrective pattern. They also develop when extensions occur in Motive Waves. These complex patterns often lead to incorrect or premature buy and sell signals.

The Elliott Waves Theory or Elliott Wave Principle (EWP) is one of the more popular price action patterns used by advanced traders and is used by some of the top fund managers. However, it is not a straight forward pattern that can be read with absolute clarity in real time. What it does provide is good risk/reward opportunities to enter in the direction of the trend.

Elliott Wave Theory was first put forward by a qualified accountant named Ralph N. Elliott in the early Twentieth century. It is closely related to the tenets of Dow Theory. Elliott studied the historical movement of the Dow Jones averages and noticed the presence of a repetitive cyclic pattern that he first described in booklet entitled The Wave Principle in 1938 and elaborated on in Nature's Law: The Secret of the Universe in 1946. Elliott identified these as natural cycles in collective investor psychology, or crowd psychology, that moves from optimism to pessimism and back again and is reflected in the price chart. 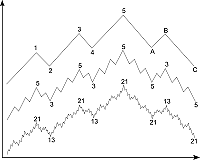 In Elliott's theory, the market price moves in a repetitive wave pattern, a term borrowed from Dow Jones who likened the movement of stock prices to the ebb and flow of ocean waves. Elliott's wave pattern alternates between a five wave of progress, called a motive phase, and a three wave of counter-trend movement called a corrective phase. The five wave of the motive phase are labeled with numbers 1, 2, 3, 4, and 5, while the three waves of the corrective phase are labeled with letters A, B, and C. The first wave in the motive phase, Wave 1, moves in the direction of the emerging trend only to be interrupted by a counter-trend move labeled Wave 2. Wave 3 resumes the trend and is often the strongest wave but it too is interrupted by a counter-trend move in Wave 4. Finally, the Wave 5 moves up to the end of the trend. The three wave corrective phase takes over with Wave A marking the end of the previous trend. Wave B attempts to re-establish the previous trend but fails as Wave C again moves against the previous trend. In this way, the five waves of the motive phase and the three waves of the corrective phase combine to form a complete cycle.

It is important to note that motive waves do not always indicate a bullish price advance and a corrective wave does not always indicate a bearish price decline. Instead, motive waves move in the direction of the wave of one higher degree. Thus, in a motive wave, the subordinate waves 1, 3, and 5 are also motive waves while the subordinate waves 2 and 4 are corrective and move against the direction of the wave of a higher degree. Similarly, in a corrective wave, Wave A and Wave C are motive while Wave B is corrective. Note: motive wave are sometimes called impulse waves, but the two terms are not synonymous. A motive wave can be either an impulse wave or it can be a less common diagonal triangle.

Elliott Wave Theory has only three simple rules that apply to impulse waves and should never be broken:

3 Wave 4 may not penetrate the price territory of Wave 1, except when is part of a diagonal triangle. On leveraged markets, such as futures and ForEx markets, Wave 4 may not close beyond the close of Wave 1. Leveraged markets tend to have moments of volatility that create spikes between the high or low of the bar and the actual close. These short lived spikes often have little technical value.

When one of these rules is broken, it indicates that an error has been made in wave counting and the wave count needs to be reassessed.

In addition to these rules are a few guidelines that are typical of Elliott waves but do not always occur and thus are guidelines rather than rules. These guidelines include extension, truncation, alteration, channeling, and equality.