There are only three simple rules in Elliott Wave Theory that apply to impulse waves and should never be broken. The rules are:

In addition to these three rules are a few ...

There are several guidelines for motive waves that can aide in labeling a wave count. These guidelines include extension, truncation, channeling, and equality. 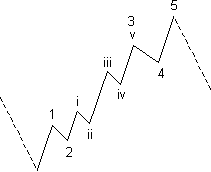 Motive waves generally consist of five subordinate waves labeled 1-2-3-4-5, but one of these subordinate waves can be extended to form an elongated impulse wave with exaggerated subordinate waves. Extension in one of the guidelines and is usually applied to Wave 3, though it can also be applied to Wave 5. The three rules provide an indication that a wave should be extended. If Wave 3 is the shortest wave, or Wave 4 overlaps the area of Wave 1, then Wave 3 needs to be extended. Extensions can simply be considered as counting another four waves as part of the impulse wave but instead of labeling them 1-2-3-4-5-6-7-8-9, waves 3, 4, 5, 6, and 7 are labeled as subordinate, or waves of a lesser degree. In this case it becomes 1-2-i-ii-iii-iv-v3-4-5 with Wave v (the Wave 5 of a lesser degree) being the end of Wave 3. It is also possible to extend Wave 5 if wave is not the shortest wave, and Wave 4 does not overlap with Wave 1. In this case, extending Wave 3 or Wave 5 would carry the same overall message. Furthermore, an extension can occur within an extension. 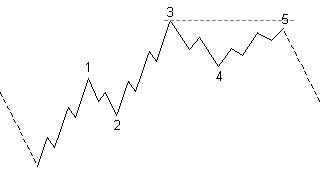 Generally, the subordinate impulse waves in a motive wave (waves 1, 3, and 5) will all be higher than the previous subordinate impulse wave with Wave 3 usually being the strongest wave. However, Wave 5 will sometimes fail to exceed the end of Wave 3. This is called truncation, and is another guideline. The truncated fifth wave must contain five subordinate waves or the wave count will not be valid. Truncation usually occurs after a particularly strong Wave 3 and indicates weakness in the preceding trend. It is also more common in highly leveraged markets, such as Forex markets and Commodity Futures.

Wave 1 and Wave 5 tend to exhibit a degree of equality in terms of distance. This is another guideline and helps indicate where Wave 5 is likely to end.

It is possible to draw a trend line connecting the ends of Wave 1 and Wave 3. A channel can then be drawn parallel to the trend line with its base at the end Wave 2. This is the guideline of channeling and helps indicate where Wave 4 is likely to end. 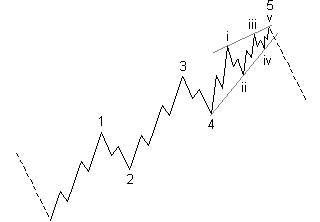 Diagonal triangles occur more often in Wave 5 of an impulse or Wave C of a correction, where they indicate exhaustion of the larger movement and are called ending diagonals. The subordinate waves of an ending diagonal have a 3-3-3-3-3 wave pattern.

On rare occasions a diagonal triangle may occur in Wave 1 of an impulse or in Wave A of a zigzag correction. Here they are called leading diagonals and their subordinate waves form a 5-3-5-3-5 wave pattern.