Some charting applications have this tool labeled as Fibonacci Expansions.

The application of Fibonacci projections differ from other studies in that two price waves are required: an initial wave and a completed wave in the counter direction. The Fibonacci price projection is then projected from the end of the counter trend move.

Multiple Fibonacci projections can also be drawn by applying the Fibonacci ratios to different price waves in the same direction and projecting those studies to the start of a price movement in the direction. This creates multiple levels with areas were two or more Fibonacci levels are in close proximity being more significant.

The following chart shows a Fibonacci Price Projection on daily chart of the GBP/USD. The initial price study is taken from the swing low made on August 2, 2013 to the swing high made on August 21, 2013. The resulting levels are then projected to the next swing low that was made on August 28, 2013. Notice how the subsequent rally has already met resistance twice at the 127.2% projection level. This may have been a good level to take profit. 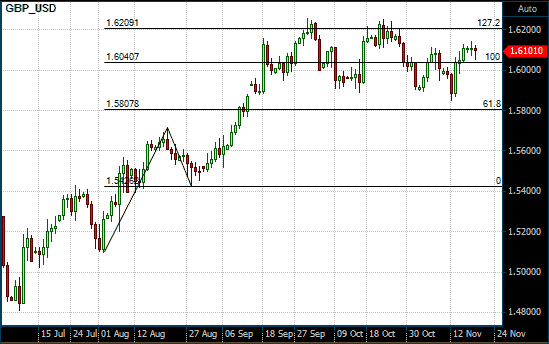