The Relative Volatility Index (RVI) is a volatility indicator based on the Relative Strength Index (RSI) indicator. It was developed by Donald Dorsey in the 1990s and is used to indicate the direction of volatility. It measures the standard deviation of the high and low prices of a security over a period of time with a time period of 10 being the default. It is often used as a confirmation for other indicators rather than on its own.

Once calculated, the RVI is plotted as an oscillator that ranges from 0 to 100, with a middle line that indicates the direction of volatility. When the RVI ...

The stochastic oscillator is used to determine when closing prices cluster together in the retraction of a developed trend in an attempt to identify potential entry and exit points.

To calculate the stochastic oscillator you need to calculate both the %K line followed by the %D line.

where n is the period of the %D line. If the standard 3 period %D line is used, then it is the sum of the last three %K values divided by 3.

Finally, George Lane also referred to a flattened %K or %D line as hinges, stating that a hinge may indicate that the current trend has become exhausted, and that the potential for a price reversal is great.

The following chart shows a 10,3,3 Stochastic oscillator in the lower chart panel on a 30-minute chart of the Dow Jones Industrial Index. The blue line is the raw stochastics while the red dashed line is the smoothed signal line. 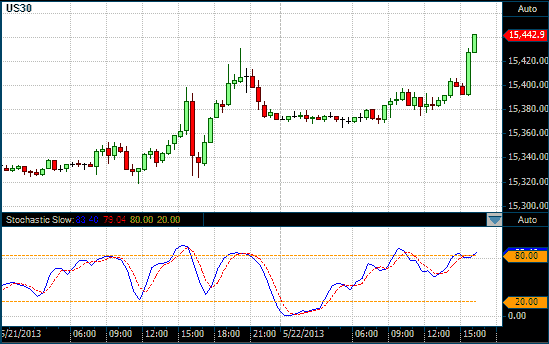