Momentum indicators can be used to track the rate at which the price of the underlying security changes rather than the price changes itself. These indicators are usually leading indicators as they tend to be oscillators by nature.

The Money Flow Index (MFI) is an oscillating momentum and market strength indicator that was developed by Gene Quong and Avrum Soudack. It is also a leading indicator, which means it tends to lead price action, and is similar in calculation as J. Welles Wilder's Relative Strength Index (RSI) with the significant difference being that the MFI uses both price and volume, a trait it has in common with the Chaikin Money Flow (CMF) indicator. In fact, the CMF is often described as a volume-weighted RSI. Like the RSI, the MFI is a range-bound oscillator that oscillates between zero and 100 and is interpreted in a similar way as the RSI.

The calculation for the MFI is rather complex and consists of a number of steps:

First, calculate the Typical Price (TP) for each period that makes up the look-back period using the formula:

Third, calculate the Positive Money Flow for the look back period by calculating the sum the positive Raw Money Flow values:

Fourth, calculate the Negative Money Flow for the look back period by calculating the sum the negative Raw Money Flow values:

The result is a range-bound line that oscillates between zero and one hundred.

The MFI oscillates between 0 and 100 and a security is considered overbought when its MFI rises above 80 and oversold when its MFI falls below 20. These levels are the suggested overbought and oversold levels as suggested by Quong and Soudack, though they do not suggest these levels as entry signals. Instead, these caution levels warn that the price action and the current trend have reached extremes that may be unsustainable. Quong and Soudack also recommend using the 90 and 10 lines as truly overbought and truly oversold levels respectively. MFI movements above 90 and below 10 are rare and indicate a higher level of unsustainability.

Divergence can be used to generate trading signals in anticipation of trend reversals. Bearish divergence occurs when the price makes a higher high while the MFI makes a lower high. This indicates that there is a weakness in the uptrend and that a trend reversal is likely. A bullish divergence occurs when the price makes a lower low but the MFI makes a higher low. Here again, weakness in the trend is alluded to with a strong probability that the trend will reverse soon.

Finally, failure swings from the 20 or 80 levels can also be used to identify potential price reversals and trade entries. A failure swing occurs when the MFI moves over the overbought or oversold level but reverses back before reaching the opposite level. Thus, when the MFI crosses up over the 20 (oversold) level but reverses before it reaches the 80 (overbought) level, it indicates that the uptrend is weak and that it may reverse soon. This signals that you should cover any long positions or go short. Similarly, when the MFI crosses down over the 80 (overbought) level but reverses before it reaches the 20 (oversold) level, it indicates a weakness in the down trend and the probability that the trend will reverse. This would be a signal to close of any short positions; or a signal to long buy.

The following chart shows a 14-period MFI in the lower chart panel on a 15-minute chart of the S&P500 Futures Index. The chart indicates bullish divergence on the afternoon of November 26, 2013. 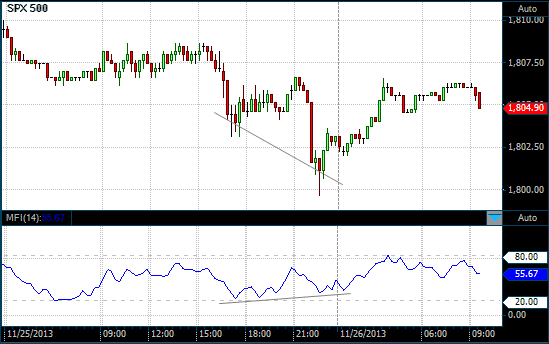