Several indicators that are placed on the price chart and are based on Moving Averages (MAs) can be used to form trading bands. These bands can be adjusted to contain most of the proce action with the price often moving between the two moving bands, touching one and then the other. These bands can be used to confirm trading signals, and can also indicate overbought and oversold levels. Some bands, such as the Bollinger Bands and the Keltner Channel have a middle line that can act as support or resistance.

The most popular bands that are used in ...

The Donchian Channel, or Price Channel as it is also know, is a trend indicator that was developed by Richard Donchian who is widely regarded as the farther of trend following. As with other bands and channels, such as the Bollinger Bands and Keltner Channels, the Donchian Channel is a price overlay that is drawn on the price chart where it plots the highest high and the lowest low a specified number of periods. The Donchian Channel can also be used to observe the volatility of a market as it widens and narrows as price volatility increases and decreases. This indicator formed the basis of the breakout system that was used to great effect by the famed Turtle Traders.

Some traders use the signals from the Donchian Channel as a stop-and-reverse, always-in-the-market system, switching from longs to shorts when the price breaks through the lower channel line, and switching from shorts to longs when the price breaks through the upper channel line. This, however, is not advisable as it does not allow for proper money management. 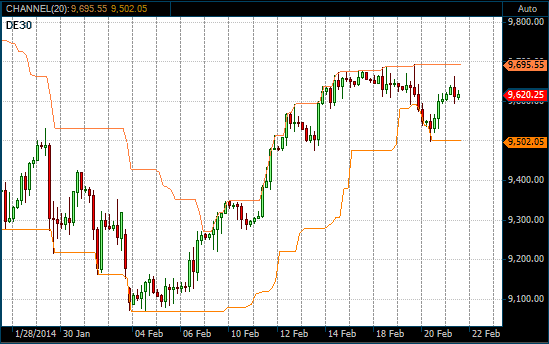