Oscillators are indicators that technicians use to analyze securities or equities that are not trending but trading in a range. Thus, oscillators are most beneficial when a security is in a horizontal trading pattern. Oscillators move higher and lower between extreme reading that determine overbought or oversold conditions. These overbought or oversold conditions indicate probable turning points in price movement and can be used as potential entry or exit points. 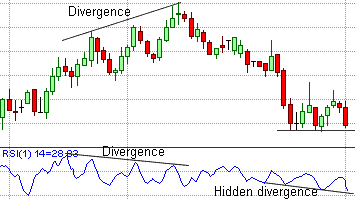 Although divergence is not an indicator in that it is not mathematical construct, it is often said to be a leading indicator, hence its inclusion in this section.

Divergence refers to the difference in movement between an oscillating indicator, such as MACD, CCI, RSI, Stochastics, etc., and the price action of the underlying financial instrument.

Regular divergence is the classic sense of divergence that occurs when the price action makes higher highs or lower lows while the oscillating indicator fails to match the higher highs or lower lows. This indicates a real weakness in the price action and an early warning that the trend is losing momentum and could be coming to an end. In other words, regular divergence indicates that a probable trend reversal could occur through it does not indicated when this will occur. For this reason chartists often turn to trend lines, chart patterns and candlestick patterns to time the entry into the trade.

Regular divergence can be either positive (bullish) or negative (bearish).

Neither regular nor hidden divergence gives clear entry signals. Instead they respectively give an indication of the weakness or strength of the underlying trend. As a result, divergence provides the probable direction of subsequent price action but does not provide the entry level. Therefore divergence can be used more effectively in conjunction with other trading techniques, such as trend lines, candlestick patterns, and moving average crossovers as a confirmation of the signals provided by those techniques, or vice versa. They can also be used with chart overlays and bands, such as trading envelopes or Bollinger Bands.