Like other support and resistance indicators, Fibonacci fans is based on the principle that the market will retrace a portion of the previous movement before continue in the direction of the trend. This is based on the fact that the financial markets do not trend in a straight line. Instead the trend is interrupted by retracements that tend not to exceed the previous wave.

When using Fibonacci fans, a technical analyst divides the previous wave in the direction of the trend by the Fibonacci ratios mentioned above. Trend lines are then drawn from the starting point through these levels and are used as possible support levels if the larger trend is an uptrend, or as possible resistance levels if the larger trend is a down trend. These thus become places at which the trader could buy in a larger uptrend or sell in a larger down trend.

The following is a 15-minute chart of the GBP/USD with a Fibonacci Fan drawn from low at 12:15 on May 20, 2013 to the high made later that day at 21:00. Notice how the subsequent retracement initially met support at the 38.2% and then again at the 61.8% line, and how once broken, the 50% support line became resistance to further buying. 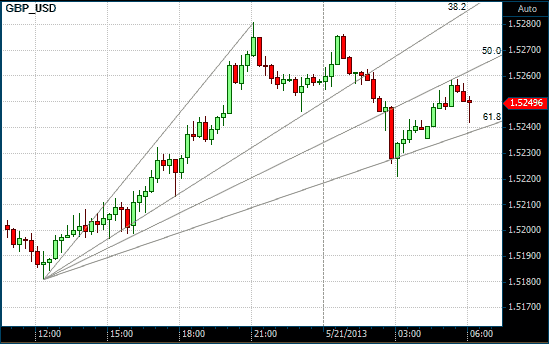